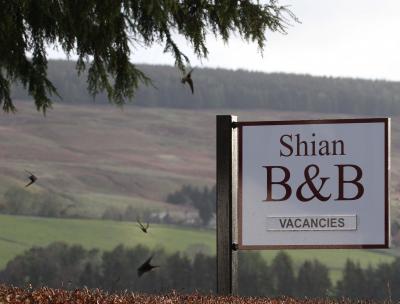 Swallows have been coming here for as long as anyone can remember. These four birds have clearly decided to inspect the new B&B sign at Shian Cottage!

Wherever they nest they're a welcome sight - and deserve a rest and good feed after their long journey!

According to the RSPB, British swallows spend their winter in South Africa: travelling through western France, across the Pyrenees, down eastern Spain into Morocco, and across the Sahara. Some birds follow the west coast of Africa avoiding the Sahara, and other European swallows travel further east and down the Nile Valley.

They migrate by day at low altitudes and find food on the way. Despite accumulating some fat reserves before crossing large areas such as the Sahara Desert, they are vulnerable to starvation during these crossings. Migration is a hazardous time and many birds die from starvation, exhaustion and in storms.

Amazingly, migrating swallows can apparently cover 200 miles a day, at speeds of 17-22 miles per hour.